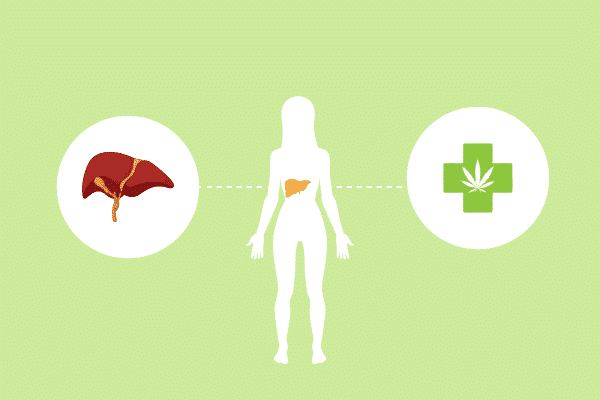 “CB2 receptor activation is as such known to modulate immune responses to viral infection and suppress inflammation”. In addition, one of the consequences of untreated viral hepatitis is liver fibrosis, which is the formation of scar tissue in reaction to liver injury by the activation of hepatic stellate cells (HSCs). CBD was shown to induce apoptosis in activated HSCs. Based on these results, CBD has potential as a combination therapy with the currently existing antiviral drugs. However, further clinical studies are needed[4].

In contrast, in 2014, researchers at the University of Ottawa proved that cannabis use did not promote steatosis, inflammation or fibrosis in hepatitis C infection. It is uncertain why results differ, but amount of alcohol consumption and body mass index may have contributed. Results also showed, sustained virologic response rates were not increased in marijuana consumers. This also contradict finding from previous studies. Nevertheless, marijuana again seems to increased appetite and alleviated on-treatment side effects, particularly in patients with ribavirin and interferon based treatment[6].

Despite the positive results demonstrated in previous studies, there are also studies showing negative effects of cannabinoid consumption in the treatment of Hepatitis C.

Are there any alternative treatments?

In 2017, a new study (4) conducted by Dr Lowe of the Maryland School of Medicine revealed that cannabidiol (CBD) for the treatment of viral hepatitis has significant properties that could be effective against the Hepatitis C Virus. The researchers combined CBD with HCV under laboratory conditions and were able to demonstrate that CBD inhibited HCV reproduction by 86.4%. Sofosbuvir and interferon were used as positive controls (to compare the same effectiveness). CBD activates CB2 receptor and induces apoptosis (a form of programmed cell dead) in splenocytes and thymocytes inhibiting the proliferation of T-cells and macrophages which are responsible for either inducing the release of pro-inflammatory proteins or attacking liver cells.

Indeed, a 2008 study showed that daily cannabis smoking is a risk factor of steatosis severity in patients with chronic hepatitis C. CB1 receptors are widely distributed not only in the peripheral and central nervous system but also in organs that control energy balance such as the liver. Steatosis is a process describing abnormal retention of fat in the liver cells by activation of the CB1 receptors. Furthermore, viral replication into hepatic cells produces some undefined proteins that interact with these fats, worsening the condition. Results suggest that a highly cannabis use disrupt conventional HCV treatment[5].

What treatments for Hepatitis C virus?

Hepatitis C Virus can also be passed from an infected mother to her baby but it is less common. The virus is not spread through breast milk, hugging, kissing or sharing drinks and food.

Viral hepatitis B (HBV) and hepatitis C (HCV) pose a major health problem globally and if untreated, both viruses lead to severe liver damage resulting in liver cirrhosis and cancer. While HBV has a vaccine, HCV has none at the moment. The risk of drug resistance, combined with the high cost of current therapies, makes it a necessity for cost-effective therapeutics to be discovered and developed. The recent surge in interest in Medical Cannabis has led to interest in evaluating and validating the therapeutic potentials of Cannabis and its metabolites against various diseases including viruses. Preliminary screening of cannabidiol (CBD) revealed that CBD is active against HCV but not against HBV in vitro. CBD inhibited HCV replication by 86.4% at a single concentration of 10 μM with EC50 of 3.163 μM in a dose-response assay. These findings suggest that CBD could be further developed and used therapeutically against HCV.

Viral hepatitis is caused by a group of viruses divided into five types (A, B, C, D, and E), and they are primarily known to attach to the liver.[1] Hepatitis B virus (HBV) and hepatitis C virus (HCV) are the most dangerous and prevalent of the five virus types.[2,3] Chronic cases of HBV as well as HCV are among the leading causes of liver cirrhosis and hepatocellular carcinoma (HCC) in the world.[4] HBV and HCV infections are also implicated in the development of other diseases including lymphoma, diabetes, and atherosclerosis.[5,6] HBV is the most prevalent type worldwide and the leading cause of HCC in some countries, especially in Asia.[7] Despite the fact that great strides have been made in the treatment and prevention of HBV and HCV, the global burden remains a major health problem. There is as such a great need to continue to search for new molecules with activity against hepatitis viruses.