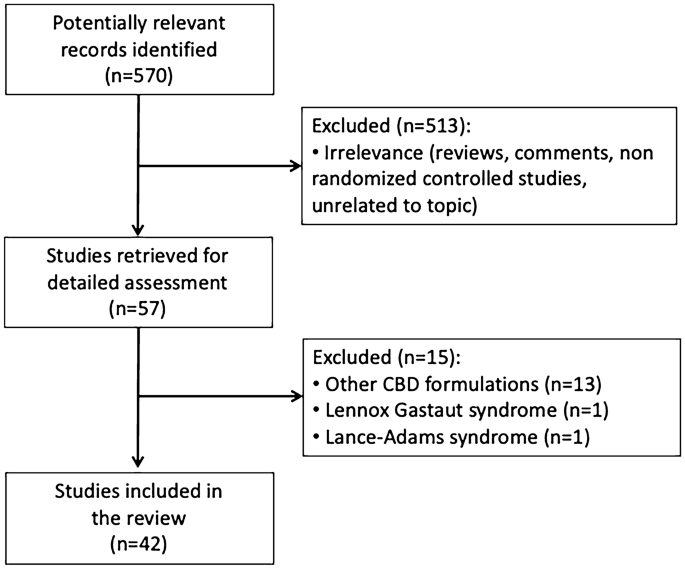 Elevation of liver function tests occurred during CBD treatment. Most of the patients who experienced a rise in serum transaminases were concomitantly taking valproic acid (VPA). As CBD does not affect systemic concentrations of VPA or its metabolite, 4-ene-VPA [43], the interaction between CBD and VPA is most likely pharmacodynamic rather than pharmacokinetic. The interaction observed at the level of in vitro hepatic mitochondria could be the mechanism at the basis of the clinical findings [62, 63]. Interestingly, several patients who presented with elevations of liver function tests during the expanded access program were re‐titrated to baseline CBD dose after the withdrawal of VPA and did not experience any further laboratory abnormalities [23, 26]. Given the risk of hepatocellular injury, slow up-titration and close monitoring of liver enzymes are recommended, mostly during the initial phases of treatment, in patients taking VPA, following changes in the CBD dose and the addition of or changes in medications with known effect on the liver, such as VPA and CLB [64].

One randomized, double-blind, placebo-controlled trial to investigate the efficacy and safety of CBD titrated to a target dose of 40 mg/kg/day in patients with infantile spasms aged 1–24 months had its primary endpoint measure based on an electroencephalogram and was stopped as it met the prespecified “No-Go Criteria” in its pilot phase after the recruitment of nine participants; improvement in caregiver and physician global impression of change was observed in most cases [14]. Clinical improvement following add-on CBD treatment was, instead, clearly observed in children aged between 3 and 16 years who presented with refractory epileptic spasms and participated in one open-label study: around 70% of patients were responders at 2 weeks, one third were free from epileptic spasms after 2 months, and 60% had a resolution in their hypsarrhythmia pattern [41]. A phase 1/2 clinical trial <"type":"clinical-trial","attrs":<"text":"NCT03014440","term_id":"NCT03014440">> NCT03014440, aim to determine the safety and tolerability of CBD (Epidiolex) in addition to the anti-epileptic treatments in use, in patients aged 1 to 20 years with drug-resistant epilepsy. Antiepileptic therapy followed by patients had to be stable for at least 1 month. To date, there is no information available regarding the treatment, the doses used and the results.

The first clinical trial GWPCARE1 was divided into two parts: Part A ( <"type":"clinical-trial","attrs":<"text":"NCT02091206","term_id":"NCT02091206">> NCT02091206) and Part B ( <"type":"clinical-trial","attrs":<"text":"NCT02091375","term_id":"NCT02091375">> NCT02091375). <"type":"clinical-trial","attrs":<"text":"NCT02091206","term_id":"NCT02091206">> NCT02091206, a double-blind randomization study (phase 2), to evaluate the safety of multiple doses of the CBD oral solution (GWP42003-P) in 34 children (4 to 10 years) with DS. All patients before enrolment had to have stabilized all AEDs at least 1 month before and the therapy stability had to be maintained during the study. Participants were randomized to one of the three doses (5, 10 and 20 mg/kg/day) of active drug or placebo at a 4:1 ratio. In addition, patients had to take their usual dose of antiepileptic drugs 2 h before CBD administration. The primary outcome was to assess the incidence of Treatment-Emergent AEs (TEAEs). A pharmacokinetic evaluation was also performed by measuring the plasma concentrations of CBD and its metabolites 7-OH-CBD and 7-carboxycannabidiol (7-COOH-CBD), and of the most common antiepileptic drugs taken by patients. Serious TEAEs, such as pyrexia and convulsions, occurred in five patients: one at the dose of 5 mg/kg/day, two at the dose of 10 mg/kg/day, one at the dose of 20 mg/kg/day and one in the placebo group. No serious TEAEs (such as pyrexia, somnolence, decreased appetite, sedation, vomiting, ataxia and abnormal behaviour) reported in 80% of patients at 5 mg/kg/day of CBD, in 62.5% at the 10 mg/kg/day dose, in 77.78% at the 20 mg/kg/day dose and in 85.71% of placebo group. SAEs such as status epilepticus, convulsion, parvovirus infection, rash maculopapular, occurred in 10% of patients who received 5 mg/kg daily of CBD, in 25% at the 10 mg/kg daily, in 11.11% at the 20 mg/kg daily and in the 14.29% in placebo group. CBD was generally well-tolerated at the 5–20 mg/kg/day dose range. Elevated transaminases (ALT or AST) were only reported with concomitant use of valproate. The study showed that exposure to CBD and its metabolites increased in a dose-dependent manner, and 7-COOH-CBD was the most abundant circulating metabolite at all doses and times. In fact, at the end of treatment, 7-COOH-CBD levels were 13–17 times higher than those of CBD. The results also showed a pharmacokinetic interaction of CBD with CLB, resulting in an increment of the metabolite N-desmethylclobazam [N-CLB] in plasma exposure of the patients. An elevation in N-CLB, was absent in patients co-administered with stiripentol, possibly reflecting prior inhibition of the CYP2C19 isoenzyme [73].

Eighteen participants who completed trial <"type":"clinical-trial","attrs":<"text":"NCT02565108","term_id":"NCT02565108">> NCT02565108 were transferred to the open-label extension (OLE) trial <"type":"clinical-trial","attrs":<"text":"NCT02564952","term_id":"NCT02564952">> NCT02564952. The OLE phase was a safety study. Initially, all participants received CBD at a dose of 20 mg/kg/day, thereafter the dose was decreased or increased to a maximum of 30 mg/kg/day. All individuals during the study continued to receive CLB. In addition to CLB, participants could not take more than two other AEDs during the study. Only seven of the 18 participants completed the study, 11.11% showed SAEs (status epilepticus, seizure, alanine aminotransferase abnormal, aspartate aminotransferase abnormal γ-glutamyltransferase abnormal). While, 94.44% of patients presented no-serious AEs such as diarrhoea, vomiting, headache, hyponatraemia, dizziness, seizure, somnolence, irritability, respiratory tract infection. The high rate of AEs in the concomitant use of the CBD and CLB for prolonged periods of time may be unsafe.

Chen, et al. [88] conducted an open-label study, the aim was to assess the tolerability and safety of CBD (Epidiolex) in the treatment of drug-resistant epilepsy in children. Sydney Children’s Hospital Network Human Research Ethics Committee approved the protocol for this study. Children (n = 40; mean age 8.5 years) with drug-resistant epilepsy and uncountable daily seizures in focal/multifocal epilepsy, epileptic encephalopathy, LGD and DS, were enrolled. CBD was administrated in addition to anti-epileptic therapy at the initial dose of 5 mg/Kg daily for 12 weeks. The initial dose was increased every week by 5 mg/Kg daily up to a maximum dose of 25 mg/Kg daily. During the treatment five children withdrew from the study, two because he had an increase in the frequency of the seizures, one because has manifested significant somnolence, one for respiratory depression and one because their transaminase level was elevated. SAEs occurred in 15 out of patients, the frequent recurring to treatment were increased seizure number (in eight patients), intercurrent illness (in five patients), liver function disorder (in all patients), hyperlipidemia (in all patients), severe somnolence with anorexia and respiratory depression (in one patient). Over-therapeutic phenytoin levels are another SAEs manifested in two participants were considered related to treatment and occurred at doses of 10 mg/kg/day and 20 mg/kg/day. All participants showed AEs not all attributable to treatment. While, AEs that occurred frequently (15 individuals) and linked to the treatment was the drowsiness (AEs spontaneously resolved the 10 participants), and gastrointestinal disorders (nausea, vomiting, diarrhoea) in nine patients, somnolence (13 individuals) and increased seizures (two individuals). Instead, 12 children showed an improvement in health in general. The results reported in this study show that Epidiolex can be considered useful as adjuvant therapy. The presence of adverse events and possible interactions with antiepileptic drugs are important aspects to be taken into consideration.

Cannabis sativa L. is an ancient medicinal plant wherefrom over 100 cannabinoids are extracted [1]. Among them, the most studied are Δ 9 –tetrahydrocannabinol (Δ 9 –THC), a psychoactive compound, and the CBD, a non-psychotropic phytocannabinoid [2]. CBD is a cyclohexene which is substituted in position 1 by a methyl group, by a 2,6-dihydroxy-4-pentylphenyl group at position 3, and with a prop-1-en-2-yl group at position 4 ( Figure 1 ). Most cannabinoids exert their action by interacting with cannabinoid receptors, but CBD shows a low affinity for these receptors. Nevertheless, it affects the activity of other receptors such as serotonin receptors [5-HT], opioid receptors [ORs], and non-endocannabinoid G protein-coupled receptors (GPCRs) [3] and other targets (ion channels and enzymes).

All doses of CBD were well-tolerated and the 20 mg/kg/day dose was chosen by the for Part B ( <"type":"clinical-trial","attrs":<"text":"NCT02091375","term_id":"NCT02091375">> NCT02091375) study. <"type":"clinical-trial","attrs":<"text":"NCT02091375","term_id":"NCT02091375">> NCT02091375 enrolled 120 children (2 to 10 years) with DS and drug-resistant epileptic seizures. Patients received either the CBD oral solution at a dose of 20 mg/kg/day (n = 61) or placebo (n = 59), for 14 weeks, in addition to the standard antiepileptic treatment. During CBD-treatment, SAEs (status epilepticus, convulsion and somnolence) occurred in 16.39% of patients and in 5.8% of the placebo group. Instead, non-serious AEs (diarrhoea, vomiting, pyrexia, fatigue, upper respiratory tract infection, nasopharyngitis, decreased appetite, somnolence, lethargy, headache, convulsion, cough, irritability, gamma-glutamyltransferase increased, transaminases increased, weight decreased) occurred in 75.41% of patients who had taken CBD at the dose of 20 mg/kg/day and in 47.46% of the placebo group. The results suggested that, following the administration of CBD, the median frequency of seizures decreased from 12.4 to 5.9, compared to a decrease from 14.9 to 14.1 in the placebo-treated group. In 43% of patients treated with CBD and in 27% of patients in the placebo group occurred a reduction in seizure frequency by 50% or more and 3 patients were free of seizures [74]. Although the administration of CBD has caused high rates of AEs, CBD appears to be efficacy in the treatment of patients with DS.