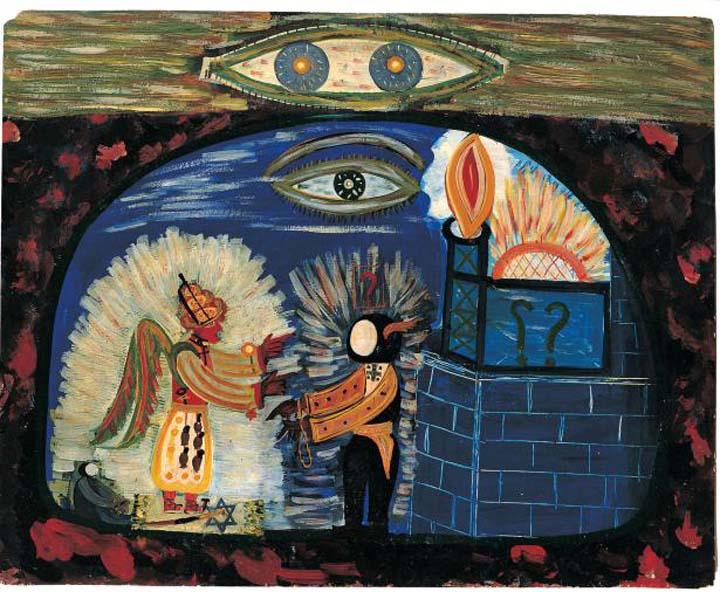 This narrative work formally allies two recurring subjects in Peter Besharo’s visual vocabulary: a winged angel in a tarboosh and a helmeted space figure in liturgical vestments. Radiant light, enhanced by a flame and a rising sun emerging from a blue brick structure, illuminates the main figures. Commanding the scene from above are two all-seeing eyes, one of which features two irises and pupils.

Besharo, who painted approximately seventy visionary landscapes during his career, was a Syrian-Lebanese immigrant who came to America around 1910; by 1913 he was peddling dry goods at mining camps around Leechburg, Pennsylvania, and by 1923 he was supporting himself as a housepainter. He lived in a room at the Penn-Lee Hotel in Leechburg and rented studio space around the corner. He was the town’s lone Christian Maronite; he fervently believed that sympathetic church leaders could bring about universal peace. 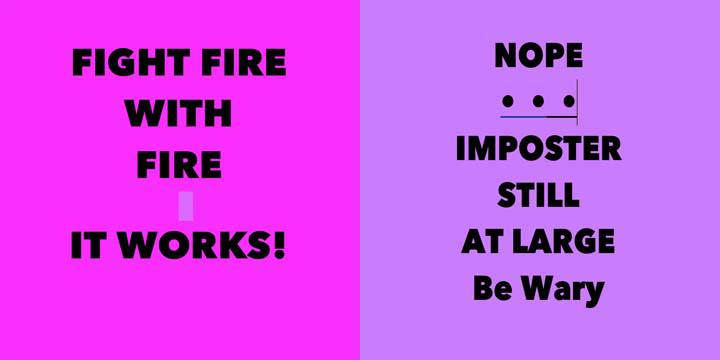 • After reading more tips from said friend in France, I began making messy “posters” to post on IG, showing the imposter’s work with my scribbled lettering [right].

• Then I became aware, from the outpouring of advice that began to fill my IG account [the real one], that I needed to report the imposter to IG.

Friday, November 27
• Checked out additional tips DMd to my [real] IG account. Thinking: what I’ve done might work until,
• I find that the fake me has blocked me from their account; I can no longer see what the imposter is up to. Trying to figure out a workaround for this, I get the
• Thunderbolt: My passport is in my birth name, Margaret Roalf. My IG is in my common name: Peggy Roalf. Not surprised, I

• Check my [unused because I loathe Fb] three Fb accounts; delete most of the profile info.
• Find the fake Facebook page that the fake me has directed my real student to in order to apply for the unrestricted $6000 grant; figure out how to report this fraud.

• I go to @_peggy.roalf_ [the fake me] and find my photo and lots of stuff I’ve posted to @peggy.roalf [the real me].