If the surgeon is experienced the most appropriate treatment would be a total laparoscopic approach. Several cohort studies have shown that two thirds of the stones detected by intraoperative cholangiography can be removed via the transcystic approach [16]. For patients in whom transcystic extraction of CBD stones fails, laparoscopic choledochotomy and stone extraction may be performed. However, this approach requires experience in laparoscopic suturing and a CBD of adequate diameter. Alternative management options have been described, but have not been subjected to RCT. For example, intraoperative ES has been reported in a number of centers. This approach is wholly dependent on the availability of endoscopic expertise in the operating room. Available results, although limited, show high clearance rates in excess of 90 %, with minimal morbidity and no increase in the length of hospital stay over that of laparoscopic cholecystectomy alone [26, 27].

The general trend of management of preoperatively diagnosed CBD stones has been by ERCP with stone extraction with stenting if indicated, followed by laparoscopic cholecystectomy. However single stage LCBDE is emerging as a primary and cost effective treatment modality with less morbidity [18].

A Cochrane systematic review by Martin et al. [3] concluded that a single-stage treatment of bile duct stones via the cystic duct approach was recommended for intraoperatively discovered CBD stones. In patients where it is not possible to clear the duct by this approach, a delayed postoperative ES should be the preferred option in most centers. However, it was also noted that the reported experience is limited, and larger randomized trials are warranted to compare these therapeutic options.

The preoperative evaluation for CBD stones should include a careful history, biochemical tests and abdominal ultrasonography. It seems reasonable to avoid further diagnostic preoperative investigations and routine intraoperative cholangiography in patients with absence of jaundice, normal liver function tests, and ultrasonographic evidence of a normal biliary tree (CBD diameter <9 mm) even in the presence of a recent acute Cholecystitis [11]. 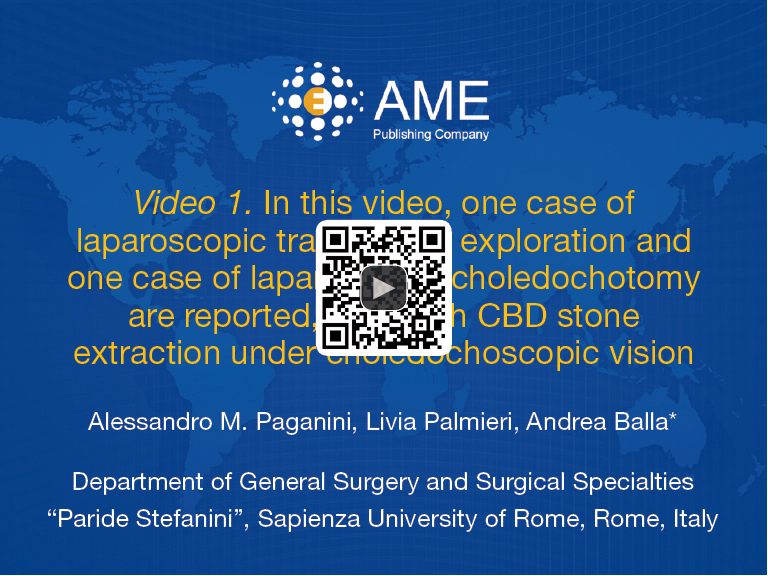 After closure of the CD, retrograde cholecystectomy is performed, and the gallbladder is removed with a specimen retrieval bag.

The indications are: ductal stones having a size larger than the size of the CD, multiple CBD stones (>5), low and medial junction between CD and CBD, common hepatic duct (CHD) stones. A prerequisite is the presence of a dilated CBD of at least 8–10 mm in diameter. Laparoscopic choledochotomy requires laparoscopic suturing experience and it may therefore be more difficult as compared to the trans-cystic approach, but CBD exploration is easier, including exploration of the CHD which may be difficult or impossible to explore trans-cystically.

External biliary drainage should be avoided whenever possible. The indications for external biliary drainage, whether trans-cystic or T-tube (based on surgeon’s preference), are the following: (I) persistence of fibrin debris or bile sludge at the end of CBD exploration; (II) if pneumatic dilation or passage of the basket catheter through the papilla have been carried out, that could be the cause of edema and cholangitis; (III) if it is not possible to extract a ductal stone which is knowingly left behind.

The authors report the surgical techniques that they follow for laparoscopic CBD exploration by trans-cystic and choledochotomy approach during LC.

After exposure of the inferior surface of the liver indocyanine green (ICG) fluorescence cholangiography (FC) is performed prior to dissection. The procedure begins with dissection and isolation of the CD and cystic artery. ICG-FC and angiography (FA) are used to improve visualization of the anatomy. The cystic artery is divided between 10 mm titanium clips. In this case the CD is dilated and thickened preventing complete closure of the CD by titanium clips, and the gallbladder infundibulum is closed with a ligature. The CD is then opened with scissors and it is cannulated with a 4 Fr percutaneous cholangiogram catheter. Intraoperative C-arm fluoro-cholangiography (IOC), not shown in this video, confirmed the presence of ductal stone (Figure 1).

Our choice to perform a transverse choledochotomy rather than a longitudinal one is because a transverse incision interrupts less ductal arterioles and its suture reduces the risk of ischemia. Should a larger stone be present, a transverse incision cannot be extended. Instead, with a longitudinal choledochotomy, there may be tendency on the part of the surgeon towards extending the ductal incision when large stones are present, and its subsequent suture narrows the CBD which gains an hourglass configuration, with consequent risk of bile stasis and recurrent primary brown stones formation.

A short transverse choledochotomy is performed and direct exploration of the CBD and CHD is carried out with the flexible choledochoscope. The scope is inserted through the CBD opening, directing its tip towards the papilla. After the stone is visualized, a four wire, flat stone extractor catheter is advanced through the working channel of the choledochoscope and the basket is deployed after passing its tip beyond the stone. The catheter is then withdrawn from the CBD until the stone is entrapped. The catheter is then pulled back to the tip of the scope which is retrieved to the peritoneal cavity where the stone is released and retrieved. Next, the choledochoscope is directed towards the intrahepatic ducts to check for the absence of residual stones.

Should a stone be impacted at the papilla, that cannot be mobilized with the basket catheter, an electrohydraulic lithotripsy probe, if available, may be placed under vision in contact with the CBD stone and used to break the stone. The fragments are then removed with a basket catheter or washed away with saline irrigation after intravenous administration of glucagon (1 mg) to relax the papilla.