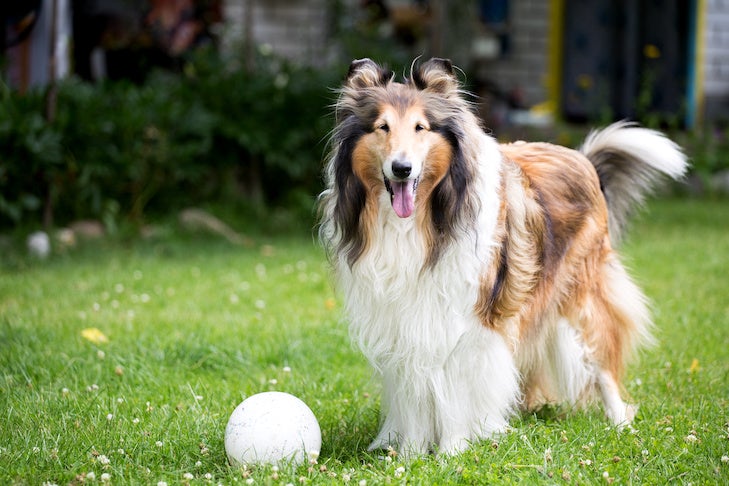 While it is legal to sell hemp-derived products containing less than 0.3 percent THC, until recently the American Veterinary Medical Association did not approve of veterinarians suggesting any cannabis products, including CBD, for patients. Even now, the law is unclear enough that many veterinarians fear repercussions if something went wrong due to their suggestion of CBD.

Other: There’s also evidence from laboratory animals that CBD is effective in promoting bone healing, fighting infection, treating inflammatory bowel disease, slowing degenerative myelopathy, quelling nausea, and relieving pain, but these have yet to be specifically examined in dogs.

Topper, a 7-year-old Ibizan Hound, could hardly walk after being diagnosed with severe arthritic changes due to Valley fever. “The pain became so debilitating he had to be carried outside to eat, drink, or use the bathroom,” recalls owner Christy Moore. “He was on pain medication but it wasn’t working. A friend recommended CBD. Within three days he could walk on all four legs and I was crying tears of joy. It was the miracle we needed.”

Lady Amelthia, a Greyhound, was so petrified of thunderstorms she would destroy a crate to escape. “Holding her only made her claw to get away. A ThunderShirt reduced her from 100 to 90 on the anxiety scale,” recalls owner Jenn Boswell, director of the Alabama Greyhound Adoption Center. “Veterinary-prescribed trazodone took it down to a 50. Tried three drops of CBD oil and it went down to a 5.”

How to Choose CBD For Dogs?

Overall, the evidence is compelling that CBD can help at least some conditions. The endocannabinoid system is the largest system in the body, and the least explored. Every year brings new discoveries—and new claims. It’s the beginning of a brave new world of health, but as with any new path, expect some wrong turns, dead ends, and false hopes. CBD is not a miracle drug, but it may be the miracle your dog needs.

Choose broad-spectrum products, which include other cannabinoids and substances known as terpenes that are also in the cannabis plant. CBD seems to work best when it’s in conjunction with these rather than isolated. But avoid full-spectrum products that include THC.

Aim for about 0.1 to 0.2 mg per kilogram of your dog’s weight, given twice daily by mouth. Work up gradually, but beware that more is not always better with CBD, as sometimes the response is biphasic, meaning that it doesn’t work if you give too little or too much.

Success stories abound of dogs overcoming anxiety, slowing seizures, and even beating cancer due to cannabidiol (CBD), one of more than 100 cannabinoids found in cannabis plants. But how can one substance help so many unrelated problems? Or can it?

Many veterinarians are reluctant to suggest CBD, whether because they believe CBD is not yet sufficiently proven helpful or because they fear professional or legal repercussions. CBD products are not approved by the Food and Drug Administration for dogs, but neither are common supplements such as glucosamine or fish oil; nor the majority of human-approved prescription drugs routinely prescribed in veterinary practice. A: No; however, there are several possible reasons a dog who has ingested CBD may look high:

A: Vomiting, lethargy, inappetence, and diarrhea are the most common clinical signs reported. Ataxia can occasionally occur with large ingestions.

Like the CBD products meant for humans, each of these CBD pet care product types appears to have a different effect on the body — in dogs, anyway.

CBD pet care products come in many of the same forms you’re probably used to seeing for humans, including edibles (think: chewable treats and capsules), oils that can be added to food or placed under the tongue and topical creams or balms that are rubbed directly on the skin.

How is CBD administered to animals?

“I would definitely be a little concerned about giving CBD to a dog that has known liver issues,” says McGrath. Similarly, because CBD appears to be metabolized by the liver, McGrath says she’d also be wary about giving CBD to a dog who already takes a medication that’s metabolized by the liver. “We don’t really know how these things interact right now,” she says.

Analysts predict the CBD pet care market will reach $125 million by 2022, making it one of the fastest-growing segments of the CBD sector.

How does CBD work in animals?

“Around 2013 or 2014, I started looking into what research was already out there and I realized that there was essentially no real, good scientific literature in the human world, let alone the veterinary research world,” says McGrath, assistant professor of neurology at Colorado State University College of Veterinary Medicine and Biomedical Sciences. “And so I started investigating whether it would even be plausible for me to conduct any research.”