Interesting. So is the sights. 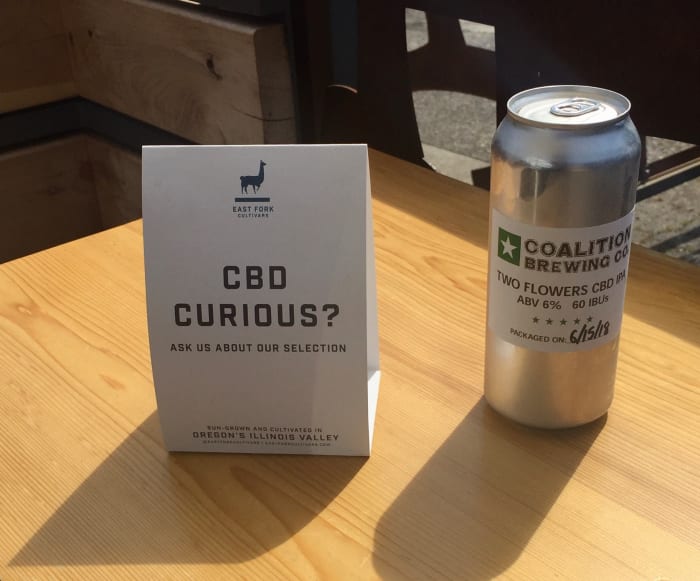 Later this summer, they debuted a CBD Hazy IPA infused with Tangie Terpenes “Certified” done in collaboration with CBD Certified/East Fork Cultivars and True Terpenes. Nathan Howard, Co-founder and President of East Fork Cultivars elaborated on this collaboration. “This beer is a celebration of Cannabidiol education and a nod to East Fork's profound education initiative, CBD Certified. Over the past year East Fork Cultivars has been delivering comprehensive CBD education via CBD Certified to thousands of cannabis and hemp professionals, the general public, and to CBD leaders like Coalition Brewing. Certified Hazy IPA is also intended to highlight the incredible synergy between craft beer and the burgeoning craft hemp and craft cannabis movement.”

According to Boyle, the cannabis and beer industries share many of the same hallmarks. They each focus on craft, community, innovation, region, and agriculture, and they are both regulated by the OLCC, and both are children of the laws that governed Prohibition in the 1920s. When they began their research into making a CBD beer, Boyle observes, “We learned of the close biological similarities of these "Two Flowers" (name of our IPA beer) with both hops and cannabis coming from the same genus Cannabaceae.”

Coalition Brewing chose to showcase their full range of CBD beers on 4/20 during their inaugural CBD Beer Festival. In addition to their year round Two Flowers IBA, this festival featured four seasonal CBD beers ranging from a light Mango sour to the deep velvety Special Brownies Stout along with a range of beers brewed using non-cannabis derived terpenes from True Terpenes. On June 15, 2018, they launched their first release of Two Flowers IPA in 16-ounce cans available only at the brewery tasting room.

Throughout Portland, one can find other occasional craft CBD beers offerings such as a CBD beer available on tap during the 32nd Annual Oregon Brewers Festival and Breakside Brewing featured a CBD IPA during an after party held as part of Feast Portland. Exactly how this trend will play out in the shot-term remains uncertain. For example, Breweries such as Dad & Dudes Breweria, and Long Trail Brewing (VT) have been ordered to cease making their CBD Beers with no sign when they will be able to resume production. Also, Black Hammer Brewing (CA) was informed they could not make their CBD beer until the brewery gets CBD added to their list of approved ingredients.

Since hosting their first Two Flowers CBD dinner over two years ago, Coalition Brewing participated in similar events such as Arcane Revelry’s private CBD infused brunch, held in November 2017. As Boyle observes, “chefs get excited at these events as they find it fun to play with stuff they normally don’t get to play with such as different terpene profiles and CBD infused beers.”

Coalition Brewing continues to work closely with their regulatory partners and the Alcohol and Tobacco Trade and Tax Bureau (TTB), and Boyle remains confident and excited they can continue making their CBD beers. (Note: Until cannabis is removed as a Schedule 1 drug, breweries cannot produce a THC beer. Some breweries such Province Brands of Canada and San Diego based Two Roots Brewing avoid the complications of combining alcohol and cannabis by manufacturing a line of non-alcoholic cannabis beers available in dispensaries.)